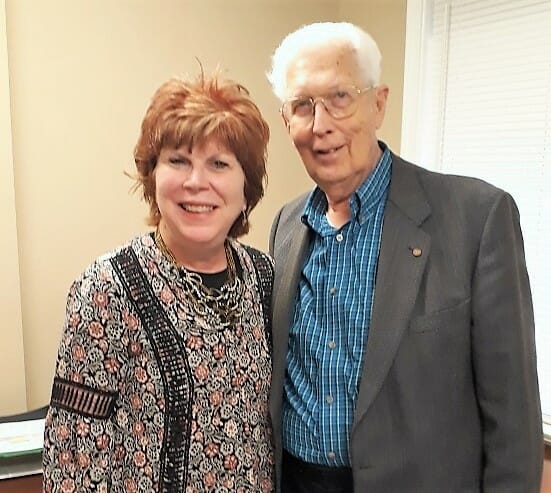 A good man died just before Christmas.  His name was Elmer Harris, and I met him once.  He was genuine and patient and he took the time to listen to someone who only works at Brother Bryan once a week.  He came to meet my husband and I was excited to be here because my dad retired from Alabama Power where Mr. Harris was CEO.  One of my brothers retired from there and one still works there.

Some of my fondest memories as a child were when we drove to pick my dad up at work at the North Birmingham Shop.  We did this from time to time because it was the early 1960s and like a lot of people, our family only had one car.  Usually my dad drove to work and my mom was left without a car, but on the days when we had dentist or doctor’s appointments, we drove my dad to work and picked him up in the afternoon.  They blew a huge whistle and we knew Daddy was coming.  Our mom would allow us to pile out of the huge backseat and wait in the gravel parking lot until we saw him coming toward the gate.  He walked with weary shoulders and he was covered in steel shop grime, but we latched onto him anyway.  He hugged us, his reason for working, like he hadn’t seen us in weeks.   Sometimes his coworker, Mr. Davis, would give us each a dime, which was a lot of money in those days.

I told Mr. Harris about my one brother who is currently working at Alabama Power and I told him my Daddy retired from there.  He was surrounded by others who brought him to Brother Bryan and he had an appointment with my husband, but he didn’t rush.  He asked me when my Daddy retired, and what he did for Alabama Power.  I told him he was a welder, and he had supported our family of six on his welder’s salary.  I think Daddy would have liked that.

As the group moved next door into Jim’s office, I could hear only snatches of the conversation, but one thing stuck with me.  Mr. Harris, in talking to one of the staff about Celebrate Recovery, said, “When you go you speak to every person in the room.”

I met him once, but I know he put into practice what he said.  One of my brothers told me how he would come into Alabama Power offices, shake hands, and pull each person close to him, asking as he did, “What have you done for Alabama Power today”?  And then he would listen.

In contrast are those who come through the door here, dressed to the nines, barely stopping, and as they look through me, say rudely, “Where’s Jim”?!

My husband and I have talked as well about people who enter a room, shake your hand, but all the while their eyes are darting around the room assessing who is the most important or influential person there.  That is the person they want to be seen with, which becomes evident when they spot them and leave you mid-sentence.

A lot can be learned about a person by how they treat those they think are beneath them.  Have you ever been out to eat with someone who treats a waitress or server as chattel?  The men here at Brother Bryan Mission have all felt that way before…many of them still do.  It takes time with the Father to begin to believe we are what He says we are.  Most of us have experienced the hurtful dismissals by others.

Our own Daniel Roberson gave his testimony to Mr. Harris.  He told him his Dad is in an assisted living home for veterans in Pell City, near where Elmer Harris lived, with Alzheimer’s.  Mr. Harris said to Daniel, “Next time you’re out there, call me and I’ll take you both out for a steak.”

I wrote a quote in my prayer journal on the first day of 2020.  Ann Voskamp said, “Sometimes you have to accept that you’ll never be acceptable enough for some people.  And whether you accept that as their issue or yours—is up to you.”

In that quote lies the key to what I think made Elmer Harris a good man.  He wasn’t afraid to lay down his self-made and to become small.  He grasped hands and looked into eyes and asked questions and he really heard.   He could have brushed me aside but asked me when my Daddy retired.  I told him 1985, and only because he had cancer.  He listened.  He said it was before he became CEO.  He would have liked Daddy, and Daddy, who was wary of the CEO type, would have liked him too.

Daniel and his Dad never got to go for that steak, but everyone in the room was certain Mr. Harris was extending a genuine invitation. Jim asked after the meeting if he could get a photo of me with Mr. Harris so I could show my brother.  He seemed like it was an honor and gladly obliged.

His trajectory with Alabama Power was very different from my dad’s but they both were very good at what they did and to this day I think it is a great company.  Others may criticize them when their power is out, but my Daddy would drive by the linemen as they worked in the dark and rain and he talked about them almost reverentially.   My mom was known to bake them pound cakes and take with coffee when they worked in her neighborhood.  It was such an honor to me to meet a former CEO and to find him to be so very kind.

A good man died just before Christmas and I’m sorry.   And I only met him once.