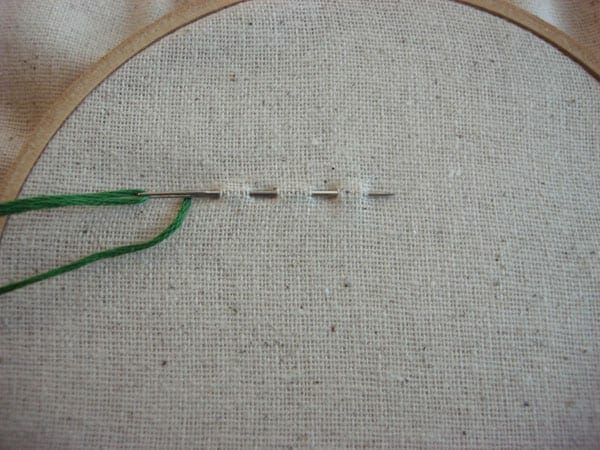 A NEEDLE IN A HAYSTACK

Our oldest daughter recently convinced me to take an embroidery class with her.  The class was at a trendy coffee shop downtown—only four students and the very patient young teacher.  As we sat in this busy place at a table in the back, I commented that it was very relaxing.  The teacher replied that it is probably because it forces us to put down our screens, and I thought there was much wisdom in what she said.

Our daughter Emily and I shopped for hoops and fabric and we have enjoyed sending each other photos on our phones each day of the progress we’ve made with our newfound hobby.  I discovered that my needle was too large and I experimented over the weekend with using a smaller one.  I sat in our den Saturday as I stitched and at one point I realized the larger needle, the one I’d gotten in the class, was missing.  I looked under the sofa cushions and on the rug in front of me.  I thought I remembered putting the needle down in the kitchen so I went back and looked everywhere.  The needle was gone. I had awful thoughts of one of the grandkids coming over and stepping on the needle or even Jim or myself.  I remembered a story that Jim’s aunt told me about stepping on a needle once and it went all the way into her foot, and I shuddered as I searched for the needle.

By Sunday morning I had actually forgotten about it.  The missing needle got lost in the jumble of things that were crowding out my mind before church.  I left, came back home, and the data that contained the missing embroidery needle was pretty much deleted from my 60 year old mind.

Monday I was busy cooking for my catering job and our daughter came over with our grandson.  We even talked about embroidery and looked at patterns online but I still never remembered the needle.  This morning I went outside to walk our dogs.  It is a beautiful day in Alabama and feels like spring.  The dogs pulled on their leashes letting me know that they were expecting a longer walk than I had planned.  I laughed and let them pull me and as I stepped off the curb in front of our house, the sun hit something on the street and I saw a small glint…just enough to make me look down.  There on the pavement in front of our house was my missing needle!  I picked it up, amazed that I had even seen it.  We live on a very hilly street and the leaves from the top of the street wash down in front of our house.  The needle rested in the only spot in front of our house where there were no leaves.

I wish I could say that I began to thank God for allowing me to find the needle.  Instead, my faith was so small that I text messaged our daughter as soon as I got in the house.

“Did you lose your embroidery needle?”  I asked.

I reasoned that it had to be hers.  That she had been at our house the day before and had surely dropped it.  When she finally called to ask what I was talking about, she looked and found her needle safely in the project she is currently sewing.  The finding of the needle was not random.  God longs to show Himself strong and mighty in our lives.  He used the tiniest of objects to remind me of that.

Nothing that happens to us is by chance.  The men who come in the doors at Brother Bryan Mission are here for a reason.  Each man’s circumstances are different but one thing they all have in common is that the hand of our heavenly Father led them through these doors.  He has a beautiful plan that He longs to unfold before us.  His timing is impeccable and He makes no mistakes.  The hardest situations don’t scare Him as He lovingly redeems even the worst traits in us.

I will probably never know how the needle got from our den on Saturday to the street in front of our house and stayed there, undisturbed, until Tuesday.  I wasn’t worried about it and have other needles—it wasn’t even something of great value.  But I do know that the finding of it was planned intricately by One who loves me deeply.  And only God knew that in a Lent devotion book I am reading, the reading on Saturday said, “Ask Him today frank questions”.  I asked Him a very frank question that had nothing to do with a needle and I waited for Him to show me His answer, which I believed did not come.

Today, I had a break in my schedule at just the right time…the dogs convinced me to go on a longer walk than normal…the morning sun peeked through the trees at just the right moment to hit something metallic in the street…I noticed that small glint…and the needle that I had given up on, was found.

Psalm 37:20 says, “ The steps of a man are established by the Lord and He delights in his way”.

And I believe that as He establishes our footsteps, there are days when He just might speak to those around His throne and say, “Watch this”.