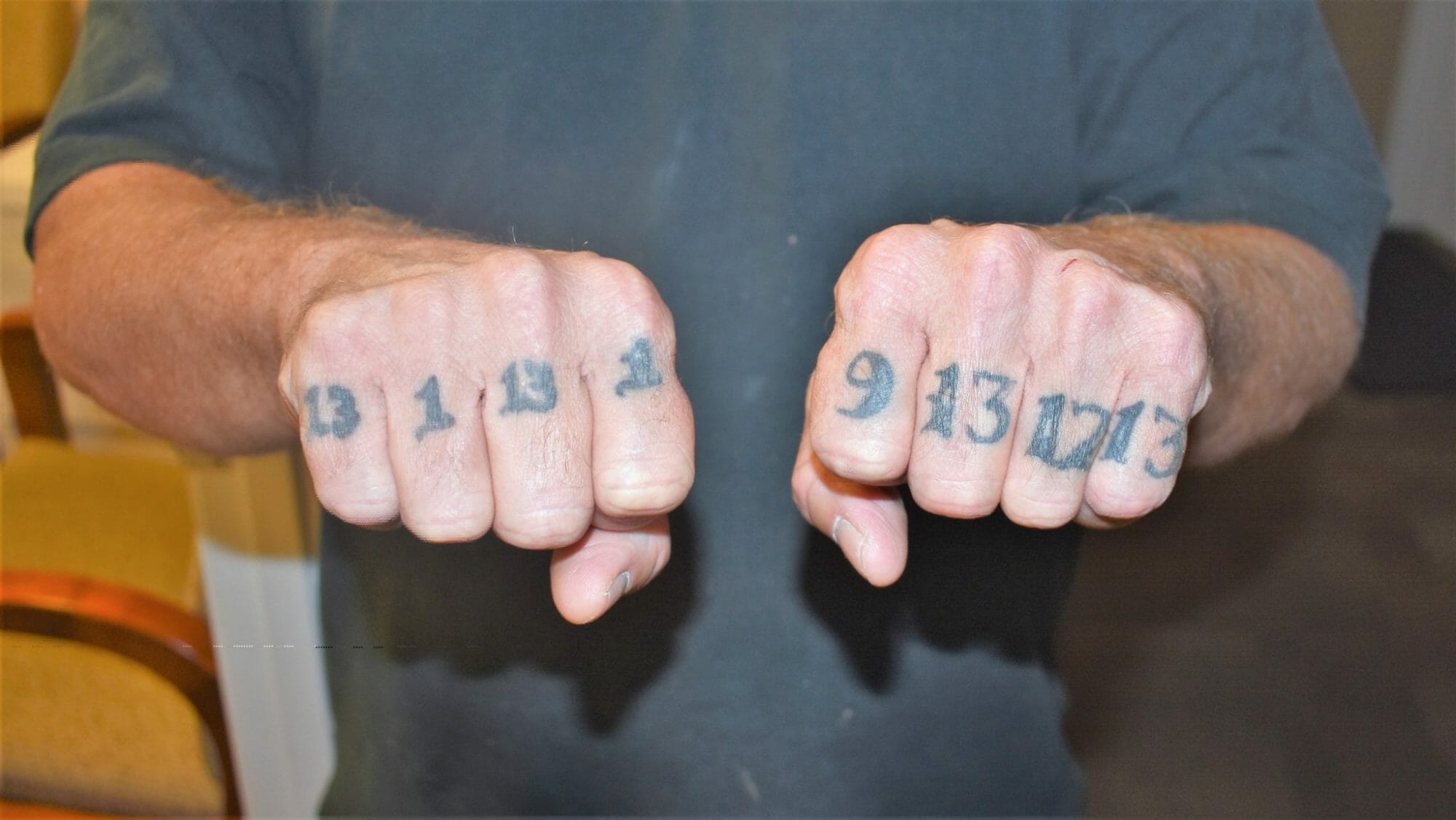 HANDS THAT TELL A STORY

It wasn’t an ordinary Friday.  My husband had an eye appointment so I drove myself to work at BBM.  As I stepped out of the car and onto the sidewalk out front, I noticed a beautiful yellow colored finch lying dead on the sidewalk.  I bent over and looked at it and thought how sad to be greeted first thing by this pitiful sight.   I wondered what had happened to him.

Jimmy Coshatt pulled up behind me and got out of the BBM van.  I called him over to look.  I pointed out that ants were beginning to crawl on the bird and if Jim were here, I’d ask him to bury him.  Jimmy and I stood over the bird for a moment then went in two separate entrances to the mission.   I was approached inside the door by an outside guest who asked if we could give him a bottle of water on this hot day and another man who asked where he needed to go to get an ID.  I had just made it to my desk when Jimmy walked in.  He held out his hands which were obviously dirty and said, “I buried the little bird”.

Many of you may have heard Jimmy’s testimony.  When he was 8 yrs old he saw his father murder his mother.  He felt such rage and anger toward his dad and suffered from anxiety attacks for years.  He lived in fear of having one at school, but he tells about how family members would hold his little body as he shrieked in fear of what, he didn’t know.  He told me his mom wore a tank top…it was August in Alabama.  She was shot in the chest and fell over backwards and he ran to her.  Their eyes met.  And she was gone.  He said he remembers her look and knows that her last thought was of him.  No child should have to experience what he experienced.

His mother’s parents were godly people and they took him and his sister in, raising them in the church.  They gave Jimmy the choice of whether to keep his last name or change it to their own, his mother’s maiden name.  He chose to change it.  He remembers that over and over his grandparents would say, “You are going to have to forgive.  Someday, you will have to forgive your Dad”.   Jimmy says he never once heard these people who lived out their faith say a harm word about his dad.  And he did forgive his father when he died.   He talks about going to see his dad’s body and expecting to feel more hate and rage but when he saw him in the casket he didn’t feel that.  He said that day was the beginning of his own healing.

After that Friday when Jimmy buried the bird, I was awakened and felt prompted several times, “Ask Jimmy about his tattoos”.  The next Friday when I worked, he came by the office door.  I said, “Do you mind me asking what your tattoos say”?  He seemed a bit embarrassed but held up his hands, knuckles bent, so I could see.   I don’t know what I expected him to say, but what he did say was not what I expected.  The 13th letter of the alphabet is M, the first letter is A, so the numbers on his fingers spell out “Mama”.  The tattoo on that hand is a tribute to his mom.  The other hand has similar numbers which stand for “I Miss Little Man”…a tribute to a young nephew who died.  He said he did feel slightly embarrassed over the tattoos and had paid for them with coffee when he was in prison.  I said it is part of his story and God is the author of each of our stories and he should never be embarrassed.

Today I sat down with Jimmy to collect information to write this.  He told me in graphic detail about the murder of his mom.  He told me about his freedom from the anxiety attacks, and how even in his own drug and alcohol abuse and eventual prison time, God protected him and guided him to the life he now has.    As we talked our conversation turned to the kidnapping and subsequent murder of Kamille “Cupcake” McKinney, and we talked about the fact that we both fervently prayed for her safety and release.  Jimmy said he got angry at God when he found out she was dead, then apologized to God the next day.  I said I got angry too, and my faith was tested as well, as I’m sure is the case with many people across our city and state and even nation.  We all cried out to God to deliver this precious girl…to bring her home unharmed…to protect her and keep her.  And we prayed unceasingly as the days ticked by and fall finally arrived in Birmingham and we read that she was abducted wearing no shoes.

Jimmy said, “You know I went to the memorial for her over at the park”.  I had to lean in to hear because his voice had gotten softer.  He said they gave out purple ribbons because that was Cupcake’s favorite color.  He has his in his Bible he said, and he’s using it as inspiration to read through the Bible again. He will do it, he said, as a tribute to this little girl.   I said I wish I had known 8 year old Jimmy…that I could have hugged him and said to the scared little boy who watched his mother’s life taken right in front of him that he would be okay…that he would grow up to be a fine man like his grandfather.  His heart is tender and he has a kindness that proves he has not let any aspect of his story make him bitter.  He wears the word MAMA in numerical code on his hand and their last look at each other is vividly in his heart all these years later.  He can see God’s hand and how the horrible ashes are being turned into great beauty.  He carries a purple ribbon in his Bible and who knew that a little girl named Cupcake would help a heart, already scarred, to heal just a little more.

The street is busy in front of Brother Bryan Mission and the sidewalk is rarely still.  It is a concrete jungle but there are trees with dirt beneath them, and a beautiful yellow finch placed in its final resting place by a man with hands that tell a sad but beautiful story.

Fall has finally come to Birmingham and the trees give up their leaves – their true colors ablaze with glory.  And we know that even the hardest and saddest things, placed in the hands of the Master are never ruined or wasted.