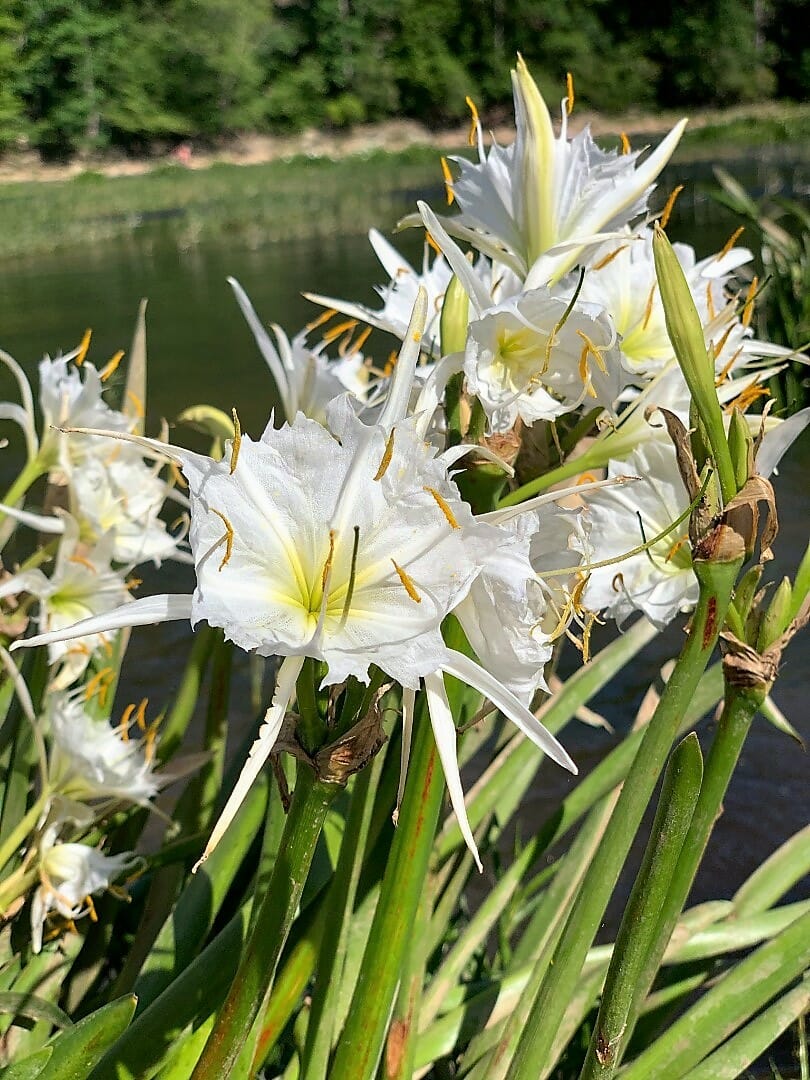 Mother’s Day, 2020, came with a new narrative called Covid.    Our oldest daughter, Emily, sometimes bears the challenge of planning and ideas because she is the only child now who lives nearby.  I told her early on that she should plan something for her and her family and Jim and I were fine to be alone.  She kept saying she wanted to do something together, outside, and different.  We mulled this over for several days.  A couple days before Mother’s Day she sent me a text that said, “You know what I would love to do?  Go see the Cahaba Lilies”.  My response was “Let’s go”.

Her husband Martin prepared lunch at their house and then we all set off to the Cahaba River.  None of us knew what to expect since none of us had ever seen the Cahaba lilies, but the day was beautiful and we looked forward to spending time outside.  When we arrived at the river, traffic was congested.  It seemed that everyone had the same idea.  We squeezed into a parking place off the gravel road and set out on foot.  We were surprised to see that the lilies were only growing in the middle of the river.  We could see them from a distance and they were glorious, but the only way to see them up close was by kayak, canoe, or wading.  Emily and I left the children with Jim and Martin and walked maybe a mile down the gravel road.  As we encountered different people, we asked if there was access farther down the road that was closer to the lilies.  A young couple told us they were in the middle of the river and they had tried to wade but the rocks were just too slippery.

We all began to walk in the other direction and we saw people wading out into the river.  Some had large sticks for balance, some held onto each other, but all were moving very slowly and carefully.  We sat on the bank and watched as each small group reached the lilies.  They took photos, and smelled and touched the lilies before starting the slippery trek back.  None of us had worn swimsuits or shoes that we could wear in the water.   We were truly Cahaba lily newbies.  Emily really wanted to get closer so Jim said, “Come on”.  They removed their shoes, rolled up their pants, and headed out.  Jim turned to me and I said “No thanks”.  I said I didn’t want to risk falling, breaking a bone, and having to go to a Covid laced emergency room.  Martin and the kids and I sat on the bank and watched as they slid and slipped and grasped their way out.  As we watched, I realized that what I really was saying was that I wasn’t willing to risk.

Soon two young women walked up with their mom.  She was red-headed like me and had a brace on her knee.  I overheard her say to her daughters, “I’ll sit here.  You two go”.  One of the daughters said, “Mom, don’t be ridiculous.  It’ll be fun”.  And I watched as they set off, arm in arm, not too far behind Emily and Jim.  They slipped and slid and laughed and squealed and I was so enthralled with how much fun they were having.  They were making a delightful Mother’s day memory, and I was sitting on the bank.  As Jim and Emily took photos, sniffed and touched the lilies, I began to unlace my shoes and roll up my pants.  A lady who had reached the bank threw her huge stick over to the side of me as they left.  I got her stick, called out to Jim, “I want to go out”.  I held his hand and he directed me where to put my feet and where the rocks were really slick.  In those places he grasped my arm more tightly and I leaned into him and clutched my gifted stick.  And we slipped and slid and laughed and we made it out to the lilies.  We sniffed and touched and Emily took our picture from the bank.  The red-headed lady with the brace on her knee passed me and we smiled at each other and I said I wasn’t going to go until I saw her and how much fun she was having with her daughters.

Fear can keep us paralyzed.  The Covid-19 pandemic has many people living in fear.  It is a scary thing.  It has affected people we all know and love.  It has affected Brother Bryan Mission.   Everyone has to choose how to deal with it.  Some people we know have barely left home since March.  Others have jobs that are essential and have no choice.  Our choice as a family has been to obey the authorities over us by wearing masks and sanitizing and being as wise and careful as we can be.  But we have also chosen to see our immediate family and sit around the table and spend holidays together and see Cahaba lilies on Mother’s day.  Our daughter talked about their first time back at church and how the pastor said, “look around you.  Some people are wearing masks, and some are not.  The ones with masks are not more spiritual than the ones without and vice versa.  We are extending grace to others who don’t believe the same”.   In Birmingham (and more recently, Jefferson Country) we are required to wear masks and we do.  We carry hand sanitizer with us everywhere we go.  We shop for groceries but make a list and try to get in and out of the store as quickly as possible.  We have chosen to live wisely but not in fear.  Shelley Giglio said, “Before the truth can set you free you need to recognize which lie is holding you hostage.”  For me, on Mother’s day, it was fear.

I could choose to sit on the bank and watch from a distance, letting fear win.  Instead I chose to trust my heavenly Father, and to believe that He, who created the lilies to begin with, wanted me to enjoy them.  Together, my husband and I stooped and smelled them and cupped them in our hands and marveled at their beauty.  We stepped on mossy rocks and we shrieked like children when we slipped and we laughed and made a memory.  And I firmly believe that the God who knew about Covid-19 before the foundation of the earth and who imagined and created the Cahaba lilies, delighted in our delight and laughed the loudest of all.