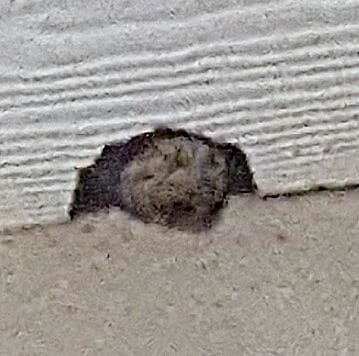 It was early February and there was no mention, at least in Alabama, of a pandemic.  What freedom we enjoyed and took for granted!  I had driven to Georgia to stay a couple of days with our daughter, Jane.  Her new husband was going on a retreat so we thought it would be fun to spend some time together.  As soon as I arrived she started telling me things she had planned.  We shopped, discovered a Mexican restaurant where we shared fajitas, and decided to see the movie Little Women that night.  Jane had seen the movie twice but I hadn’t seen it at all, so she said she would gladly sit through it a third time so that I could see it.  We ran by the grocery store to pick up a few things and then to their apartment to put them away.

As we left for the movie, we made our way up the stairs, Jane ahead of me.  It was very, very cold.  Jane made it to the top step and I saw her hesitate.  She looked at something, then turned and ran back down the stairs.  I could tell she was terrified.  I asked what she had seen.  On the top step, she said, was a frog.  It was sitting there, she said, with its “beady eyes” looking right at her.  She begged me to go look.  Jane and I had some negative experiences in Cuba with frogs.  The frogs in Cuba were very aggressive.  After our missions trip to Cuba, we both give frogs a very wide berth.

I tip toed up the concrete stairs and in the very corner was a frog.  I did confirm that his eyes were open but he seemed to take no notice of me whatsoever.  I stomped.  He didn’t move.  His eyes blinked but other than that there was no acknowledgement on his part that he was even aware of us.  The clock was ticking for us to make it to the movie on time.

“Is there another way to get to the parking lot?”  I asked her.

“Nope”, she answered.  Up the stairs is the only way.

Their apartment is on the bottom and all the way around back of their complex and right behind it is a large wooded area.  They have seen deer and foxes since they have lived there.

I reasoned that there had to be another way.  She said the only way was to walk all around the perimeter of the apartment building, and, she added, there was a huge hill that there was no way we could climb.

It was pitch dark and we clung to each other as we made our way along the edge of the woods.  I stepped in something slick that I presumed to be mud.  There was really no way to know.  We walked and walked and then began to go uphill.  Jane was behind me and began to say repeatedly, “We can’t go up this hill”.  I reached the top before she finished her last sentence.  Later, as she relayed this story to Tyler she said, “Mom, in her heels, scaled that hill like a mountain climber”.  It was more to do with adrenalin than athleticism, for sure.

We made it on time to the movie and we giggled all the way about the frog.  We never considered that he might still be there when we got home, but as we approached the top of the stairs we cautiously peered over and it appeared that the frog hadn’t moved.  He sat facing the corner of the step but I could see his eyes blinking.  Jane went first this time and almost flew down the stairs. I followed immediately behind her.

I googled frogs and found that in really cold weather they do something called burrowing.  It made me sad to think that this frog had gotten out of the woods and onto the step and then maybe couldn’t figure out what to do.  I suggested that we get a large stick and poke the frog and see if we could guide him to the woods.  Jane said if the frog jumped anywhere near us we would both have heart attacks.  The stick was a bad idea.  All I knew to do for sure was pray, so pray we did.  We asked God to move the frog Himself to a safer, warmer area.  Somewhere FAR, far away.

The next morning we had scheduled Mother/daughter manicures.  As we left the apartment, we cautiously approached the top step.  The frog was gone!   We began to question if some predator got him, if someone in another apartment had stepped on him, moved him, etc…We then said we chose to believe that God moved this pitiful freezing frog just like we had asked Him.  How easy it is to reason away answers to prayer.

As I drove back to Birmingham later that night I thought of how silly we had behaved.  We went in pitch darkness in woods where we couldn’t see a thing.  We stepped in and over heaven only knows what as we felt slickness under our feet.  We ran straight up a hill where anything could have been…all to avoid a tiny creature that was harmless.

So many times the men at BBM behave the same way.  Rather than stick to the program laid out before them, they try to think of all manner of options.  They put together different scenarios where they can be in control themselves and still achieve the desired results.  Someone tells them to say this, to do this, to avoid doing the program.  Many have no problem at all asking that an exception be made for them…just for them…because they believe their way is better.  We really are all like that in the right circumstances.  We try to reason with God and suggest to the Creator of All that we, in fact, know better.

The frog has resurfaced at Jane and Tyler’s apartment…at least we presume him to be the same.  She sent me a photo about a month ago of a frog sitting in a tiny hole in the siding.  I drove back over this past week and someone had thrown a piece of chewed up gum beside his tiny home.  I grabbed a stick and swept the gum away.  I told Jane it was disrespectful to mar up his little home with blue gum.  We still don’t like frogs but we are trying to garner a small amount of respect as he tries to make himself at home.

Today I am working at BBM.  A young man came in and said he is leaving.  The anxiety was getting to him.  He might go into a different program somewhere else.  He is young and wearing a green shirt, and could be my son or yours.  I look into his eyes and see fear.  I pray that God protects him and gets him where He wants him to be, and I can’t help but let my mind take me back to early February, before the pandemic, when our biggest fear was a tiny, freezing frog on the step.

Psalm 64:1 says “preserve my life from the dread of the enemy”.  Sometimes the smallest dread can send us running recklessly in the absolute wrong direction, because the well lit path shows all too clearly where we have the least amount of faith.