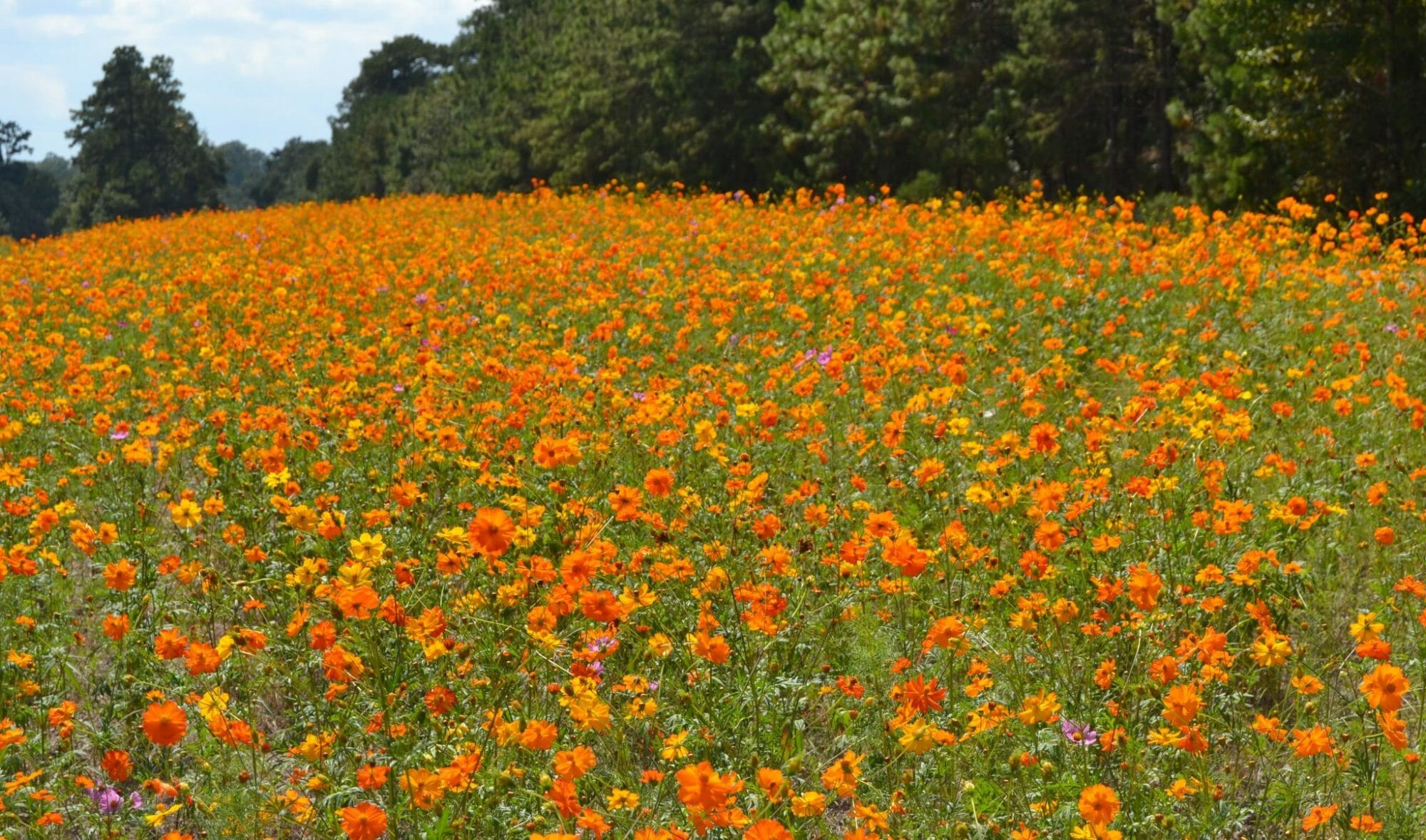 Months ago my husband and I were driving in a rural area outside Birmingham after a funeral.  As we drove in a fairly unfamiliar part of Alabama we passed a huge field of yellow wildflowers.  They were stunning, and there appeared to be acres of them.  Everywhere we could see the yellow flowers waved in the breeze.

As we rounded the next curve, my husband said, “Nobody planted them.  Look.”

He pointed out a large sign that said, “LANDFILL.”

The flowers had grown up out of garbage.  Stinky, smelly, rotting garbage…acres of garbage.  And out of the midst of the nastiest place, beauty emerged.  Breathtaking beauty.

This morning there was much talk about yesterday’s day of prayer.  A group of men from the BBM program and also staff members did a prayer walk.  They prayed at City Hall for our mayor and city councilmen and other city leaders.  They went to Linn Park and asked people in the park if they could pray with them for specific needs.  Daniel Roberson saw a bench in the park where he used to sit when he was homeless.  He left the group to go and sit on the bench again and reflect and pray.  Daniel is now a staff member at BBM.  Another man was beaten badly before coming to BBM.  At a nearby park 4 men beat him badly enough for him to be hospitalized.  It was in the hospital that some other serious health problems were discovered…health issues that, left untreated, could have killed him.  He ended up at Brother Bryan Mission where God has changed his heart and life.  He went back to the park with the prayer group and saw the same 4 men who beat him, and he walked boldly to them.  He said he wanted them to know that what they did really hurt him, but because of that beating some very good things happened.  He told them he forgave them.  In doing so, he set himself free.  He also told his attackers that he would recommend Brother Bryan to them as well.  Like Joseph in the Bible said to his brothers after they sold him into slavery, “You meant it for evil but God meant it for good.”

Rob, a program man from Corinth, MS, said they were on their way back to the mission when they saw a homeless man sitting inside a doorway.  Rob said, “Let’s pray for him.”  He and another man knelt beside him and asked if they could pray.  In this day of Covid and masking and fear of touching or getting too close to others, Rob said he reached out and took the man by the arm.  When they asked how they could pray the man said, “I’m hungry.  I need food.”  They prayed, and as soon as they said “Amen”, a woman drove up, put down the window, and asked, “Hey, can y’all use some food?”  She distributed food to the man and others and a “random” homeless man in a doorway, who moments before had felt hopeless, saw God answer prayer on his behalf and provide the food he so desperately needed.

When Rob told me the story of the man in the doorway, his face clouded over and the tears came.  He was a little embarrassed and apologized, but there is great beauty in the tender, merciful ways that God deals with a human soul.  It is obvious that he has a heart that has been changed and his scars and hurts have been redeemed.  I believe God will use Rob in mighty ways.

Two different times I have been working on a Friday here when two different people, outside guests, got angry and literally pulled our door off its hinges.  The first time it happened was alarming; the second time was unbelievable.  Another day I was coming back from the bank and post office and I heard horrible, foul language being shrieked from the street outside.  Jim and I stood at the door and watched as an irate man fought with his mother.   One of the people in their group said over and over, “This is your mother!”  I could imagine the hurt this woman was feeling.  These are the bad stories… the landfill moments. Downtown and especially near a rescue mission there can be a lot of garbage being dumped.  But it is also a place that God moves and works amazingly on an almost daily basis.

In the book Hind’s Feet on High Places by Hannah Hurnard, there is a part early in the book where Much-Afraid walks with the Shepherd through the desert.  She sees wildflowers blooming in a desolate place and she tells the Shepherd she doesn’t think it fair that such beauty grows in a place where no one can see.  The Shepherd tells her that nothing that He and God make is ever wasted, and the flowers give themselves willingly and with great love even if nobody ever sees them but God.  He tells her that in all the glories of this world, the greatest work ever done in man is work that is done in secret by the Father.

There is much work being done in hearts and lives here at BBM.  Most of it is the secret, inner workings of the Spirit.  But often there is so much joy and love that it begins to spill outward and overflow and there are tattooed men, hardened by rejection and abandonment themselves,  who can’t help but kneel, reach out, touch and pray.  And how sweetly the Father hears and answers!

These are the wildflower moments…the tender and golden blooms that sway in the breeze and their fragrance spreads like an offering down the sidewalks and into the parks and streets and doorways to others who need Him.  And the beauty that grows out of landfill moments is a beauty that reaches out and up after hope, producing flowers that give themselves willingly even if nobody else sees.

The most breathtaking beauty.