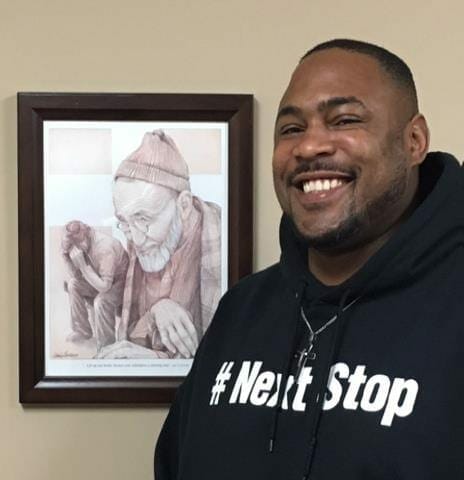 The Promise of Victory

Homelessness is much more than not having a roof over your head. Long before most who come to Brother Bryan Mission are at the point of not having a roof over their head they’ve known a great deal of defeat. Such defeat brings loneliness, doubt, fear, anger, and hopelessness that buries some – forever. But “God so loved the world that he gave his only Son, that whoever believes in Him (puts their trust in Him) shall not perish, but have everlasting life” – John 3:16.

With each struggling life that comes to this Mission, whether for a meal, clothes, or seeking a better life, there is so much more than what is on the surface. I’m thankful to know that in spite of the enormity of burdens and defeat that overwhelm many, there is a victory that even this lost life can know. That real promise is why this unique Mission stands on the front-line as a beacon of hope – in the heart of Birmingham.

As I recently spent time with Fornando, a 39-year old father who, through BBM’s Christ-centered New Life Program (NLF), is building a real foundation for his life, I asked him what has changed in his life since he came here. With a bold grin on his face he said, “Everything! Absolutely everything. I had lost all sense of direction. There was nothing good about the situations I had allowed myself to fall into”.

He said, “I had no idea how open to a path of defeat, and eventual homelessness, that I was putting myself. I knew I was wrong, but with no real structure in my life, I was blind to the cost of my compromises. The more I put myself first, the easier it was to justify my actions.”

Shortly before Fornando ended up on the streets, he had begun to sense conviction about how deeply wrong his life had become – but he didn’t know if or how he could rebuild his life. “When I learned about the Mission’s NLF Program, as I listened to staff and watched men in NLF Program, I knew there was real hope.”

Today as Fornando nears graduation from BBM’s 9-month NLF Program he continues to solidify the new foundation of his life. He has reestablished solid relations with family – especially with his two young sons. He is very involved with a church, and active in two weekly Men’s Bible studies. He says, “The difference isn’t starting over, but is allowing God to lead me to build a whole new foundation a foundation built on seeking and trusting Him first. Today I know that more than anything else, I need Christ to lead all of my life. I look forward to serving Christ and a greater life than I ever imagined possible”.

“When I think of the last twenty or so years of my life, it’s hard to remember when I didn’t have alcohol as a nearby companion and a frequent stumbling-block. Maybe I thought the Chaos of my life was normal.”

“I was able to get good work in both construction and food-service, but alcohol contributed to my losing jobs. As a result, there were a lot of odd-jobs I took to survive. Alcohol definitely undermined relationships with my family, my parents, friends – and fiancées.”

I asked Ron if he ever wound up living on the streets. Without hesitation he responded, “Oh yes – in Florida, New Orleans, Mobile, Birmingham – oh yes! Sometimes my homelessness wasn’t literally on the streets. Sometimes, with no place of my own, I became a “couch surfer” – making myself at home sleeping on the couch of an acquaintance. So much of it was insane”.

“But now, amazingly by God’s grace, I have a whole new perspective on the life God gave me. I cannot undue the past, but I can daily give the new life He entrusted to me to serving others for Him. I cannot imagine greater joy.

“I wish I could fully put in words how much I thank God for those He put in my life to point me to Brother Bryan Mission – and for the staff, teachers, and volunteers here that pour out their lives to help the lost begin to grasp the promise God has for us through His Son. I thank God for the supporters that make this truly life-changing Mission possible. Thank you”

Fornando and Ron are but two of the many we get to reach and work with and see each day. With your help, what a world of difference can be made. Please help make that difference today.

“God did not send his Son into the world to condemn the world but to save the world through him.” John 3:17